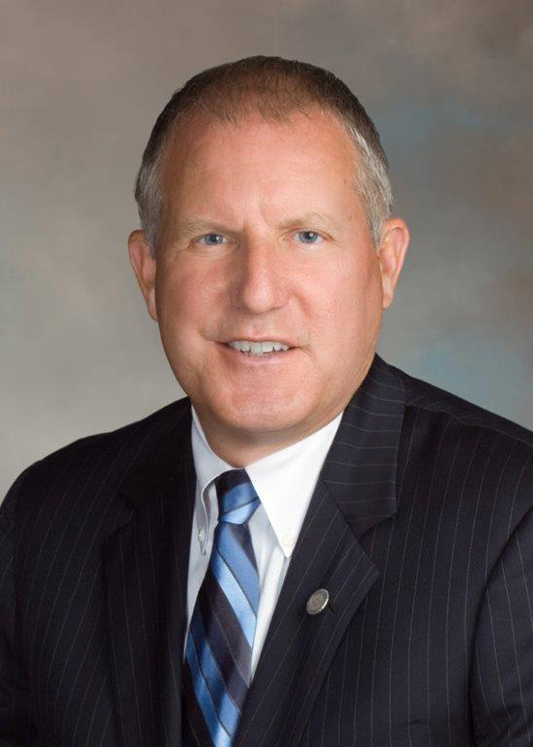 Richard D. Holcomb is the current WMATC member from the Commonwealth of Virginia. Richard D. Holcomb was the WMATC member from the Commonwealth of Virginia in FY2018 and as of the date of this report. Commissioner Holcomb was appointed to WMATC on July 21, 2010, by Governor Robert F. McDonnell, reappointed on May 23, 2014, by Governor Terence R. McAuliffe, and reappointed again on January 15, 2018, by Governor Ralph S. Northam.

In his capacity as Commissioner of the Virginia Department of Motor Vehicles (VADMV), he manages a state agency with a budget of over $244 million and a statewide workforce of more than 2,000 employees. He oversees the collection of approximately $2.8 billion in revenue annually, which funds a significant portion of the state’s new roads, and highway construction and maintenance.

During his initial seven-year tenure as Commissioner at VADMV, Commissioner Holcomb revolutionized the agency to provide the ultimate in customer service, surpassing public and private sector service organizations. Under his leadership, Virginia became the first state in the world to offer secure online driver’s license renewals.

During his most recent term as VADMV Commissioner, he has launched the robust DMV 2 Go mobile operations program. Four customer service centers on wheels provide all VADMV transactions at convenient locations such as military bases, corporate and government complexes, and senior communities. VADMV’s mobile operations expanded in 2012 with the introduction of the DMV Connect program. A nationally-recognized program, six DMV Connect teams provide ID card services to incarcerated individuals prior to their release which contributes to Virginia’s reduced recidivism rate. DMV Connect teams also serve customers at nursing homes and group homes.

Commissioner Holcomb also believes that our dedicated military members who have given so much for our nation deserve every effort we can make to provide opportunities for their futures. He conceived the Troops to TrucksSM program, which provides testing, training, and potential career opportunities for military members after service. This outreach effort, recognized by the White House, is a collaboration between VADMV, Virginia military installations, and private transportation industry groups. The program helps provide employment opportunities to our military as truck or bus drivers, or in other transportation-related jobs after service.

Commissioner Holcomb formerly served as the General Counsel and Senior Vice President for Law and Regulatory Affairs for the American Trucking Associations, the national trade association for the trucking industry. In this capacity, he managed the in-house staff of attorneys and outside counsel on an array of complex legal matters such as corporate compliance, tax, employment law, election law, patents, copyrights, trademarks and anti-trust. He advanced the association’s interests through the court system, protected the association from legal action, managed legal defense through the interpretation of legal documents, and advised ATA leadership on legal and regulatory matters.

Commissioner Holcomb served as chief of staff to three members of Congress and as General Counsel to the U.S. Senate Judiciary Subcommittee on Security and Terrorism. He served as a law clerk for a federal judge and also worked in private practice.

Commissioner Holcomb holds an undergraduate degree in political science from Hampden-Sydney College and a Juris Doctorate degree from the University of Richmond School of Law. He is also a graduate of Virginia Commonwealth University’s Virginia Executive Institute.